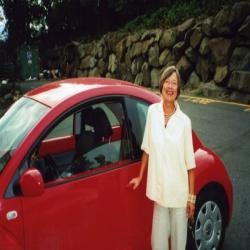 Sibyl James has published nine books: The White Junk of Love, Again (poetry); Vallarta Street (poetry), The Bakery of the Three Whores (poetry); In China with Harpo and Karl (nonfiction); The Adventures of Stout Mama (fiction); Ho Chi Minh's Motorbike (nonfiction); China Beats (poetry); Pistols and Hearts (poetry); and The Last Woro Woro to Treichville (nonfiction). Individual works have appeared in over 100 journals and anthologies internationally. She has been a freelance writer and editor for Battelle Human Affairs and various alternative energy projects. She also writes local and international travel articles for Examiner.com. She has received awards from Artist Trust, the Washington State Arts Commission, The Mayor's Office for Arts and Culture, and 4Culture, as well as prizes in literary journal contests. She has taught in the US, China, Mexico, and--as Fulbright professor--Tunisia and Cote d'Ivoire. She has also taught writing in public and private schools through the Seattle School District, Washington State Arts Commission, and the Writers in the Schools program of Seattle Arts and Lectures.

This October I was lucky enough to be in Jaipur, India, for the country's biggest festival of the year--Diwali. The holiday celebrates an event from the epic tale the Ramayana--the return of Rama to his rightful place as king after years-long exile, along with Sita who serves as the culture's symbol of the faithful wife.

Jaipur struck me as a female city, especially the old quarters known as the Pink City because so much of it is constructed of pinkish sandstone. The streets there bustle with shops, mostly devoted to adorning women and the home. They sell plenty of bling from the humblest bangles to costly tribal necklaces of silver and jewels. Fabric shops are more numerous than Starbucks in my home city of Seattle. Tie-dye is still very much alive here, as well as silks loaded with silver and gold embroidery and brocades. Much of the fabric, of course, composes the saris that almost every woman wears, even those sweeping the street or hauling garbage. You can also buy artfully coordinated sets of cloth already cut into lengths for the trousers, tunic, and scarf ensemble known as a salwar kameez. In my Western skirts or pants, I always felt dowdy in India. When I mentioned this to a woman working at my hotel (lovely in her purple sari and matching lipstick), she smiled encouragingly and put a positive spin on my situation, declaring that I was dressed like a baby. (It's true that toddlers here often wear clothing similar to what my sixty-five year old self was sporting.)

From the upper balcony of the Hawa Mahal or Palace of the Winds, Jaipur itself resembled a flock of women in the finest saris, its turreted sandstone strung with holiday banners. The palace was a haven for the harem women of the past. Approached by double courtyards, the intricately carved structure is five storeys tall but only one room wide at the top. Through its stone latticed windows, women could watch the activities on the street without themselves being seen.

Preparation for Diwali begins days ahead. Street vendors offer fireworks, statues of the many Hindu gods, tiny terracotta or painted bowls to hold the millions of candles that will be lit for this Festival of Lights. The markets are flooded with leis of marigolds for religious rituals, and bundles of tall stalks of sugar cane for good fortune. People repaint their houses; I even saw a woman renewing the wall of her home with hand-fashioned bricks of fresh cow dung.

At sunset, Jaipur's buildings blazed with strings of colored lights; on the taller hotels or office towers, the lights hung down the walls in long cascades.  These displays accented the fireworks  that filled the nights leading up to Diwali itself, culminating in a show of fireworks throughout the city that lasted for several hours and sounded like a war zone. I'm a fireworks addict; watching from my hotel roof, I was thrilled.  At one point, I left my hotel's side street to buy some mineral water from a shop across the adjoining busy road.  Everyone was smiling, shouting "Happy Diwali," and tossing firecrackers. I smiled and shouted too, and nearly got singed as I waited for a break in traffic so I could re-cross the crowded road.

In India I'd been oppressed and frustrated by the swarms of men blocking my way, demanding that I take their rickshaw, look in their shop, whatever.  In Jaipur, that was mostly absent. The exception occurred on the main night of Diwali, when I waited along with devotees (and a horde of monkeys) for a glimpse of the Krishna statue that was hidden behind pink latticed doors and two sets of curtains, and finally revealed with much fanfare. When I left the temple, the streets were packed with young men armed with fireworks and bands of police carrying batons. This was worse than the usual onslaught of hucksters, so I headed directly back to my hotel, where two young Australian women asked me whether I'd like to walk into the Pink City with them.  Explaining the scene I'd just left, I declined their offer.

When I encountered them again on the hotel roof much later, they told me about their adventure. There were almost no women on the streets, only those crowds of men who kept grabbing the Australians' boobs and bums. Once, the police had to fight the men off with the sort of bamboo poles people use to drive off monkeys. The Australians took it all in good stride, laughing about their situation.  In a way, one said, it was like we were celebrities.

The next day, riding in an auto-rickshaw behind a vehicle stuffed with girls and women, all wearing saris, smiling and waving at me, I thought the country would be ideal if  the males between the ages of five and fifty were banished somewhere to study the concept of personal space.

As Diwali wound down, I took a side trip to the Surya temple, which is really a complex of temples climbing a steep hill. The place was mobbed, mostly by women. One group "adopted" me as they moved from building to building, praying at the shrines, rubbing red dye onto their foreheads, depositing offerings of puffed rice (which they also deposited in my mouth). About halfway up the hill lay a large rectangular pool in which women were bathing or simply filling jugs of water to pour over themselves and their saris; some of those fabrics were laid out to dry in a lower garden. Monkeys climbed along the pool's edge, and the grouping of sari-clad women under the temple arch resembled those old Orientalist paintings of seraglios.

Heading up the hill, I was "kidnapped" by a gaggle of girls who clasped my hands and kept pulling me up the path. I was leaving for the States the next day; it was good to end my Indian journey in a festival of lights, hauled away by laughing women.