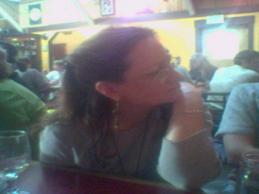 I was born in a small town in northern New York bordering on the Adirondack Forest, cold with man-high banks of snow in winter, but gloriously lush, green and beautiful in summer. Catholic school through grade six instilled in me a love of written expression – I could diagram any sentence! When I was of age I attended a local college to learn about Advertising Design and Production. Then off I went on a cross-country adventure with two cars full of friends, my higher education blowing in the wind. After sojourns in Arizona and California, I put down roots in Oregon, and took way more than my share of classes in Cultural Anthropology, while raising two kids and working. Close to retirement now, I continue to work to complete my first historical novel (a selection of which I have uploaded here).

I'm offering my writing acumen; if you are seeking good writing for your project, I hope to hear from you!

The lush vines that in spring and summer obscured the little woodland chapel were now brown and shriveled, revealing an old daubed wooden structure butting up against the rock hillside.  It had been built to protect a natural cavern in the rocks where, people said, generations ago someone received a vision of the Virgin.

As she approached the shrine, Marguerite thought about the nearby Pilgrim Road.  Dotted with hundreds of shrines and running leagues upon leagues from the northeast, it barely skirted Axat and ran through the mountains, she’d been told, deep into the southern country where the people spoke a different language and built ornate golden churches.  In summer the road would be full of pilgrims walking the route, stopping at this shrine as they would at each one along the way, kneeling to pray, leaving some small offering, perhaps taking repast, then moving on.  Sometimes she sat atop the hill to watch them, making up stories of who they were, where they came from, what their lives were all about.

Upon entering the little sanctuary Marguerite pulled her shawl tighter against the chill damp.  Her eyes traveled immediately upward, as they always did, to the creamy painted face of the statue in the central niche.  Behind the Virgin’s head moss trailed across the hillside stone, dark green tendrils dancing wildly over the rock, a profane mimic of her divine golden halo.  A more delicate growth with tiny intricacies the color of mown hay grew on Mary’s feet, and between the fingers of her outstretched hands.

The serene face seemed to betray fatigue and resignation, as though all her heavy labors on behalf of humanity had been for naught.  It seemed her downcast eyes were always fixed on a spot just behind and to the right of wherever Marguerite stood, and no number of delicate adjustments on the girl’s part could force those eyes to fall directly upon her.  She tried again nonetheless to catch the statue’s gaze, then gave up and sat on the slate floor beside the little grotto.  She noticed a few of last year’s blackened leaves still clinging to the crevice where the floor met the rock wall, and scratched at the detritus with a stick, waiting.

It was the last market day of the month, and she was honoring her appointment with Frère Auguste to meet him here.  These meetings had punctuated her life as long as she could remember.  Marguerite treated the monk with the same mixture of relaxed familiarity, love and respect accorded a senior family member.  Indeed, in her earliest memories, it was Auguste carrying her through the forest, building fires, and hovering over her at Celeste’s side during an infantile illness.  She called him Oncle.

Auguste’s words always seemed to come from a deeper place than other people’s.  Marguerite was aware that he was a very learned man.  He spoke with authority of history, and things of which no one else seemed even to be aware, except perhaps her mother.  He recited at length the writings of holy men, and even women, of the past.  He had such a fondness for poetry, it sometimes brought him to tears as he read it aloud, then passionately explained the beauty of its strange meanings.

During their meetings he would often go on for an entire afternoon, pausing only to slake his thirst with the wine he always brought with him from the abbey. “And now,” he would say with mock seriousness, “’tis time for refreshment,” and he would bid her go drink from a nearby stream or trickling waterfall while he brought out the wineskin for himself.