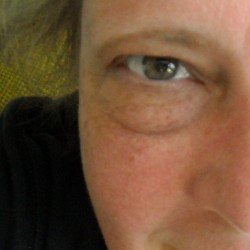 Hi. My name is Ann Schwartz and I've been a published writer for 31 years. My experience is as a journalist, writing both features and hard news. I also write public relations pieces for non-profits and create newsletters, annual reports, posters, advertisements and other promotional materials.
I'm also a photographer and fine artist.

Ultimate Vikings fan from Aitkin to take in play-offs

He’s a big guy with a great head of red hair. So Chad Hasskamp of Aitkin plays it to the fullest. He wears his red hair in a 1980s “mullet” haircut, (the mullet is a hairstyle that is short at the front and sides and long in the back) and cheers on the Minnesota Vikings football team at every home game.

“I’ve been a football van ever since I can remember – since I knew what it was,” said Hasskamp in a recent interview.

His favorite seasons for the Vikings were 1998 under the Coach Dennis Green and this year, 2017-18 under Coach Mike Zimmer.

Chad imparts some of his football wisdom: “Everybody talks about 1998 -- that team was one of those that everybody loved watching and it was a really explosive offense and the only thing that was gonna stop was a lack of a defense. This year we have an amazing defense – the best defense in the league. This team has held teams to the least points per game, held teams to least yards per game – all-time history in the NFL – in preventing opponents from converting third downs. The difference between this team and the 1998 team is with a solid defense like this it’s gonna keep you in every single game. You don’t have to have the best offense to win the game because the defense will keep the scoring low. Anytime the scoring is low it’s lots easier to win the game. You don’t have to go out and score five or six touchdowns -- maybe only two or three touchdowns are enough to win. I was always an offensive fan and in high school I was mostly focused on offense. Now I’m a defensive fan. I love watching this team go out and completely shut them down. The end result is the same, we win – a little differently, not as flashy as 1998 -- but we get the job done.”

Hasskamp was born and raised in Aitkin, graduating from Aitkin High School in 2001. He played football for the Aitkin Gobblers in 1999 and 2000, his junior and senior years. Although Aitkin is known as a wrestling, not a football, town, those teams did get over 500 percent wins and they won the first round of the high school playoffs in 1999.

“I played offensive and defensive line – I was all over the field,” he notes. He then attended St. John’s University at Collegeville, graduating with a business degree. Now, he stays busy as the next generation of well drillers for Hasskamp Brothers Well Drilling – an Aitkin business institution.

Much of Chad’s recreational fun and social life revolves around the three Vikings season tickets he buys each year. He’s at the field in Minneapolis for every home game, bringing a friend or two with him from Aitkin. At the Vikings US Bank stadium, he also meets up with a friend from the Cities -- Rich Poole -- whose job it is to supply food and drink for the day. “We put on a pretty good spread for anyone who visits us tailgating,” Hasskamp enthused. “We never run out of food and we never run out of beer.”

He met Poole through softball friends when Poole lived in the Aitkin area. “We ran into each other tailgating down there and now we’ve bought season tickets together. Our crew gets bigger every year.”

On a home-game Vikings day, usually a Sunday afternoon game, Chas leaves Aitkin about 4 in the morning. He gets to the Cities and meets his crew where they set up a two-tent city with heaters and everything they need to party in a parking lot. “We got moved to the Frist Come First Serve Lot. Last year, we were in a private lot where the Vikings cheerleaders and Skol Drum Line came through. We would get autographs and calendars and hear the cadence of the drums.”

Now their game day is brought up a notch by tailgating next to the Official Fans of the Vikings, the “Viking World Order.”

“They are the Crazies who dress up in face paint and you see them on TV all the time wearing shoulder pads,” Chad explained. “It’s fun hanging out with them as there is a church service every Sunday at 9 a.m. They also hold knighting ceremonies where new members go down on their on their knees, say an oath – they touch both shoulders with a sword… it’s cool to watch.”

Although he doesn’t dress up gaudily as some others,  Chad does sport his great mullet and a new jacket.  With help from McGregor Printing he wears a custom jeans jacket with a Minnesota Vikings logo screen printed on it and his name embroidered on it.

“My red mullet is my trademark.”  Svea Johnson and Holly Eisenbraun at Posh Hair Parlor in Aitkin keep his “doo” just right.

Into the stadium they go for the game (most of which the Vikings won this year) and back out to hang at the tailgating site for an hour or two while the traffic winds down. Then it’s deconstruct the site, load up and drive back to Aitkin for a 7 p.m. home arrival.

“I love football,” noted Hasskamp. “Other people around here hunt or fish but I watch football. My TV is always on the NFL channel and I follow football on Facebook and on an ap on my phone.”

Chad will be attending the Vikings home playoff game on January 14 in Minneapolis and may attend the Super Bowl if the Vikings get a berth. “It would make NFL history to have a team play the Super Bowl in their own stadium – not to mention their first year in the new stadium,” Chad observed, conveying some of the excitement that surrounds playoff fever.

Poole takes his duties as a chef quite seriously for tailgating cuisine. He built his own smoker and prepares briskets and ribs. He’s done kebobs and he specializes in chili. He recently showed up with five gallons of chili and he grows his own peppers for his chili.

The socializing is a big part of the whole experience, “We run into people who know us and regulars who are down there and Aitkin people from other towns.  It’s fun to meet people, to get out and talk and to spend some time with my friends. I work a lot during the week so this is my break.”

Some memorable times are when Chad traveled this holiday season to watch the Vikings play the Packers outdoors at Lambeau Field on December 22. “It was cold but that wasn’t the coldest game I’ve been to. The coldest one I’ve been too is a few years ago when they played in TCF Stadium outside, at the University of Minnesota. It was below zero that day and the beer froze in the glass before you could get back to your seat. “

“I just love football and I’m a huge Vikings fan.” Chad summed up.

Soon, we will know the team’s fate in the post season after they take the field and battle their opponent on Sunday, January 14.

From left: Chad’s sister Jen Schneider, Adam Schneider , Chad in his #64 custom jersey, his high school number that he uses for softball and football fun.  His nickname is “Peaches.” On the right are Keith and Amanda Sherman from Palisade.

In the summer, Chad’s love is softball. Here, he is captured on base with a patriotic softball uniform to set off his red mullet hairdo.  Photo from Brainerd Parks and Recreation.