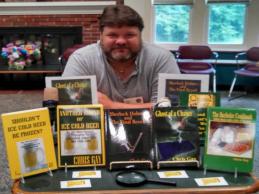 Chris Gay is an author, freelance writer, voice-over artist/broadcaster. He's been published nationally in Writer’s Digest and has written and voiced radio commercials, authored both comedic and non-comedic freelance articles, scripts, press releases, website, media and technical content, many freelance sports articles and is the media/technical writer for a clothing company. He's also done occasional radio color commentary for local sports and acted in a couple of movies and plays. He's authored the paranormal, theological thriller novel 'Ghost of a Chance,' the novella 'Sherlock Holmes and the Final Reveal' and several humor books. For seven years he wrote and broadcast a daily, minute FM radio humor spot over the Hartford, Connecticut market.

This article was published nationally in Writer's Digest magazine.

Regretfully, we have elected to reject A CHRISTMAS CAROL.

Our primary issue is its preposterous main premise. We will grant that readers may indeed be willing to accept the idea of four omnipotent ghosts returning to Earth to do good for the betterment of mankind. However, it stretches the boundaries of credibility to their very limits to expect anyone to believe a CEO would repent his ways via voluntary monetary penance. Pay his secretary’s mortgage? Double his salary? Are you certain, Mr. Dickens, that you did not intend to submit this manuscript to our humor publishing subsidiary?

Furthermore, though we respect your sincere attempt to present the public with an uplifting, enduring yuletide classic, we feel any positive message your literary work may convey would ultimately be overshadowed by its extension of the waning popularity of plum pudding at Christmas. Quite frankly, plum pudding sucks, and we do not wish to bear any responsibility for inflicting more such pudding on England for decades to come.

Another issue we have with A CHRISTMAS CAROL is that of Ebenezer Scrooge’s so-called redemption. It is more of a self-preservation, is it not? The unamiable Mr. Scrooge sees fit to dole out tongue-lashings and biting sarcasm to the first timid yet good-natured apparitions he encounters. Only when the final specter, Death, pays him a visit does Scrooge’s tune change, and right quick. Really Mr. Dickens, would you have us believe that his reaction to the Grim Reaper’s ultimatum is in actuality some earnest conversion? Nice try.

In conclusion, it is our belief that the greatest impact A CHRISTMAS CAROL could have would be
various movie adaptations. Unfortunately, the old saying “Timing is everything!” is particularly relevant in your case, as motion pictures are still half a century away. In fact, Alastair Sim won’t even be born for another 57 years. Sorry. If it serves as any consolation, I will be required to read your unbearably lengthy GREAT
EXPECTATIONS sometime around 1990.