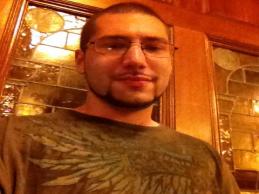 Writing is my passion. My name is Keith Fuchs and I am from Malverne, New York. I have been a writer for 13 years. I began as a poet, but quickly branched out in to other endeavors. I recently completed my first novel, entitled "Abigail". I am also a screenwriter, copy writer, article writer and review writer. I have completed various freelance assignments for a number of clients, in these respective categories. I work hard and I am devoted to my craft. I adhere to deadlines strictly and have a determination to produce my best work, every time I pick up a pen.

You cannot put a price on a dream. Numbers cannot measure heart. Words may show a man’s wit, but actions show his meaning. When you wake in the up and morning, what do you dream of? Do you write it down on paper? Do you say it to yourself repeatedly, when the scolding waters of the shower cascade upon you? Words are paper-thin but actions are heavy in weight. How motivated are you? How hungry are you to make a change? To make that dream, a reality?

Dreams are not for the sleeping. Wraiths are not a movie that we watch from a semi-conscious state. They are an insight in to our hearts, our desires and who we are as people. Yet so many mornings, people wake up and live a nightmare. Why? For many, their zest and ardor is constrained to a lonely utterance of a few desperate words. It doesn’t have to be that way. Let me tell you the story of a man, who is playing in Super Bowl XLVIII.

This man is not Peyton Manning, he did not break records. He doesn’t have a multi-million dollar contract. He doesn’t even start for the Seattle Seahawks, the team he plays for. However, Derrick Coleman is an essential part of the Seahawks special teams. Furthermore, Derrick Coleman is an inspiration to his teammates and, to many who come to know his story. I for one; am one of those people.

Derrick Coleman was born in 1990 in Los Angeles, California. At age three, the Seahawk special teamer was diagnosed as legally deaf. The young Californian always envisioned playing football professionally, when he grew up. Since a young age, Coleman was the victim of ridicule and taunting. Many made fun of his condition and that he had to wear hearing aids to achieve near normal audition.

The ambitious teen finally took his dream to the gridiron. Coleman played his high school ball at, Troy High School in the Los Angeles metropolitan area. From there, he would graduate and excel at UCLA as a kick-returner and full back. Coming out of college, Coleman was ranked the number six full-back in his 2012 draft class.

For most of Derrick Coleman’s life, he was told he could never make it to the NFL and he should quit. The relentless fullback would not accept defeat. He would not let his ailment compromise him. Ferociously, Coleman fought through the adversity. His grit and passion, forged a chance at an opportunity that he dreamed of his entire life. Over two hundred college prospects were drafted in the 2012 NFL Draft, Derrick Coleman was not one of them.

The “no’s” and nay-sayers never shouted louder. The resilient 22-year-old was faced with a choice. To let his dream die and remain written in words; or to let his actions give him another chance to seize what he has always wanted. Four months later, Derrick Coleman was signed as an undrafted free agent by the Minnesota Vikings. The Vikings took note of the ex-Bruin’s world-class speed, determination and physical play. As the story would unfold, Coleman would be cut yet again.

Once more, the young battle-tested football player had every reason to quit. His motivation would not be curbed. He would not be deterred, nor would he be defeated. The Seattle Seahawks were looking to fill their roster with some young talent at the end of 2012. Derrick Coleman rested in their crosshairs. In December 2012, Coleman was signed by the Seahawks to their practice squad. In the coming months, the persistent athlete would ascend the depth chart. Through his actions, not his words! He was diligent and made the 53-man roster for the 2013-2014 season.

Now, Derrick Coleman is ready to suit up and take the field for Super Bowl XLVIII. With him, he carries the flag for every man and woman who has ever had a dream and, was told they could not achieve it. Coleman is a brutal hitter and is a key component of Seattle’s special teams. The fullback also is featured in Seattle’s goal line formation. Perhaps, Derrick Coleman will score a touchdown tonight. Maybe, he’ll make a big play. His sheer presence reminds us that nothing can stop you, if you want something bad enough.

You cannot put a price on a dream. Words may show a man’s wit, but actions his meaning. How do you want to be defined? By your words or by your actions? Or perhaps you can even be defined by both. You can begin by searching your heart for what you want. Next, say to yourself “I can have it”. The only separation between you and whatever your dream is…is you. Derrick Coleman is deaf; since he was young, he was told that he could never be an NFL football player. Yet, he is the first deaf offensive player in NFL history. What was said and what was done, were two different things. Thus, leave nothing at just words. Redefine your meaning, by your actions.  Do not wait for tomorrow, what you can begin today