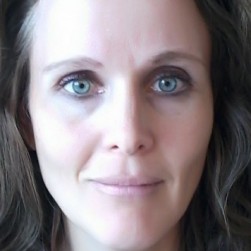 My name is Jenny Witt. I’m a lifelong writer, both informative and creative, with an English Education degree and Library Science degree. Outside of work, I enjoy music and playing games with friends and family, especially my 4 kids.

Kaufman’s article, “The Need for Belonging in Math and Science”, explains a social phenomenon that can occur in the academic communities of science, technology, engineering and mathematics (or STEM) when women attempt to study in those fields. The author uses personal example and research studies to support his claim.

First, the personal example of Catherine Good is shared, demonstrating a strong example of how someone so gifted at math could achieve so much but ultimately leave the field due to her identity as a female mathematician being threatened. The article goes on to highlight some of Good’s research in her new field of social psychology where studies have found that “the need for belonging is a fundamental human motive” (Kaufman, 2013) and, in the case of the socially stigmatized, is very influential indeed, as was the case with Good. Other researchers have also found Good’s theories to be true in the case of race as well. The author supposes that “belonging uncertainty” is a contributing factor to the disparity between men and women in STEM fields. Despite rising numbers of women in these areas, there is still a large gap between genders and white males definitely outnumber women and other racial groups.

To further understand these social concepts, Good, along with two other researchers, conducted studies particularly focused on women studying in math fields. For one study, they specifically wanted to know if one’s sense of belonging is linked to excelling in math. Using the five areas of membership, acceptance, affect, desire to fade into the background, and trust in instructor’s desire to help, the researchers discovered that indeed one’s rating of these factors could predict both genders’ wish to study math in the future, along with perceived usefulness, confidence in, and anxiety towards math. It also confirmed prior research that previous achievement in an area does not guarantee a sense of belonging or a desire to pursue any field.

Another study the researchers conducted relied on women believing two stereotypes about math: math is a fixed trait instead of a cultivated one and women were not as talented as men in this subject. If the female students espoused those two beliefs, they were less likely to feel a sense of belonging and, consequently, had lower grades in math classes and were less likely to pursue math in the future. These same effects were not found in the male students. However, if women did not believe those two myths, they were able to have positive math experiences that would lead them to further math study. Even if believing that math is a malleable trait is accomplished however, the study demonstrated that feeling supported in a learning environment is just as powerful.

In conclusion, this article shows that the consequences of being in an environment of negative stereotypes can destroy a person’s sense of belonging and impact their desire to study in the math field as well as their math achievements. The need for belonging is indeed a powerful one.

Though baby Elena looks innocent, she is fast becoming a perpetrator of great destruction. Her rolling has given her new mobility, and, as a result, a greater range of danger.

The victim: a paper pterodactyl that Isaac brought home from preschool. Though simplistic in design, it has offered him many adventures, flying all over the house and even in the great outdoors.

However, one bright summer morning, the dinosaur was subject to great trauma. Elena found it on the floor and consequently ripped off its head and part of a wing all while drowning it in saliva. Isaac, who was watching a show at the time, was jarred back to reality when he saw his precious dinosaur within his sister's grasp. A cry of "ELENA!" rent the air, and I, who was working on homework, found out about the crime.

Fortunately, the pterodactyl was reparable; Scotch tape does work miracles for the young, and I am sure there will be many more adventures to come for the flying dinosaur. In the meantime, our vigilance must increase if we are able to save other innocent toys from the same fate. 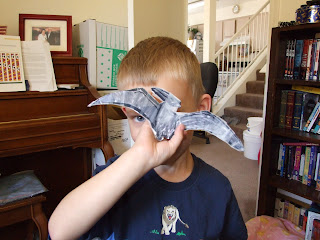