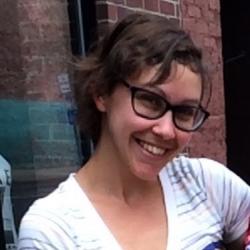 Amanda has been working in web content since graduating college. She began with the CBS Interactive web series Wallstrip, writing scripts, managing and editing other writers, and running the blog, which was developed using SEO and trends. From there, she ran other web shows in a similar fashion, as well as running social media marketing for web shows like TV.com's TV in a Flash. She worked on the web content side of The Amazing Race in 2012, as well as Jeff Schroeder's web series Around the World for Free. She also ran the blog for Natali Morris' web series Crash Test Mom, which involved adapting Natali's reviews of baby products into blog form. Most recently, she wrote and produced a web show for a top Swiss bank's employees and is currently writing a web series for employment lawyers, along with writing for Nashville Moms Blog and other freelance work. She specializes in breaking information down so that it is understandable and clear, and she can adapt her tone to fit any project.

The following is a blog post that accompanied an episode of CBS Interactive's news and politics web show MobLogic:

On May 2nd, Cyclone Nargis hit Burma. The cyclone's winds threw the rain around so hard that it blistered the skin of the Burmese. The area that was hardest hit is an area about the size of Austria known as the Irrawaddy delta. It's also known as Burma's rice bowl.

Though Burma produced only 1% of the global rice trade last year, it's one of their biggest domestic crops. At least one large rice warehouse was destroyed in the storm. Another lost it's roof, leading to drenched stocks of the crop. Unharvested rice is showing signs of spoilage. And the planting season is starting.

Of course, the military junta says the rice is fine, water's good for rice. And while that's true, it's not usually good when the rice is drowning.

There's more to this than just rice. And there's more to it than just the storm. The third factor in this is the military junta, which has ruled Burma unchecked for 46 years. The cyclone destroyed homes, crops, and lives, and the military is so afraid they'll lose their grip on the country that they're restricting foreign aid. The state-controlled television airs constant loops of generals handing out food and medical supplies, even as people line dirt roads begging for food and clothing. Burmese prime minister Thein Sein has announced the end of the aid phase and the beginning of reconstruction. They've also announced that their new constitution, which gives the military even more power, was passed (in the aftermath of the cyclone) with 99% turnout. Not likely.

So what was a natural disaster has become a humanitarian disaster. Around 2.5 million people are displaced and struggling to survive. Aid workers have estimated that over 133,000 are dead. The military says the number is around 78,000. Regardless, more people are dying every day. And on top of that, desperation can turn people into the lowest form of human. Around a million children may have have been separated from their parents, and reports of trafficking and abduction have increased.

The military finally allowed foreign diplomats to tour the Irrawaddy delta on Saturday. They also allowed aid workers from "friendly" nations into the region. The nations are deemed friendly because they benefit from the military junta. China, Thailand, India, Bangladesh... they're quite comfortable with the regime. Why wouldn't they be? They get precious stones, drugs, and timber from Burma. No wonder these are the guys that are discouraging UN action.

Meanwhile, other countries and private aid donors are being encouraged to give their supplies to the military, who will then distribute the supplies. Oh yeah, they sound like nice fellas... no need to worry about their distribution tactics.

So not only is this a natural disaster, not only is this a humanitarian disaster, it's a political minefield. Asian countries don't want to see the regime toppled, but they may be the only ones. Western nations would love to open up Burma for foreign trade and investment, and the people in Burma are ready for a change. As Burmese travel agent Chin Chin told Time Magazine, "We have hated our government for 20 years. Now we hate them more."

This cyclone could be the start of a revolution, and the military knows that. They've put their political fears before their own people. But maybe they've gone too far. Maybe things will start to change. That is, if any Burmese are left standing after the skies clear.