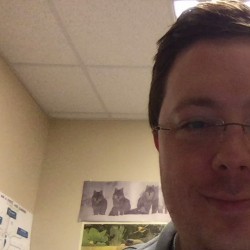 By day: troubleshoot, repair, and help educate students at an all Apple based private school

Almost Impossible! isn't just another side-scroller, endless runner, or gimmicky game out to make a quick buck, it's a nearly flawless game that feels and plays like a classic arcade game from the 80's. On the surface the game looks like a simple time waster but you will instantly be sucked into this addictive and enjoyable game.

In Almost Impossible! you control an always bouncing ball of white light through 50 vibrant levels of increasing difficulty. The game only has two controls, left and right, but don't let the simple controls fool you into thinking the game is easy. It's difficult, like throw your old Nintendo controller at the TV difficult.

The levels are made up of obstacles such as spikes, balls, and blocks that you must avoid as you guide the bouncing ball of light across the screen. Oddly, one of the best parts of the game is dying and trust me, you will die a lot. If you touch one of the many obstacles the ball of light violently shatters into pixelated blocks that fly across the screen. This is where Almost Impossible!'s impressive physics and lighting engine really shine. Each pixelated block has dynamic shadows that change in real time as it sails through the air and interacts with other blocks and pieces of the level.

The retro soundtrack and sound effects are another area that Almost Impossible! really shines. The driving, thumping score harkens back to an era of games like Sonic the Hedgehog and Mega Man. The echoing boom sound effect that is triggered each time your ball of light shatters is straight out of Nintendo era games and it makes dying a little less frustrating.

It's hard to find much wrong with Almost Impossible!. The only issues are minor at best. There is a scoring system that allows you to compare scores with friends but it is unclear how the scores are tallied. As of right now the game has 50 levels. This equates to only a few hours of gameplay depending on how fast you can get through the levels. It is unclear if more levels will be added to the game and if they will be free or an in-app purchase.

Almost Impossible! is the impressive work of sole indie developer Dan Counsell. Counsell is the founder and designer of Realmac Software, the British development studio behind popular Mac and iOS applications RapidWeaver and Clear.