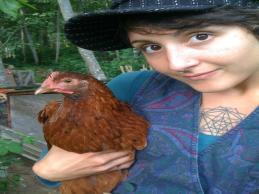 Welcome to my profile! I'm Taylor, a graduate of interdisciplinary studies with a focus on creative writing. Since 2012, I've been working as a tutor in the Writing Center at Whatcom Community College. In the Writing Center, we work on a variety of technical and stylistic elements of the craft of writing ranging from MLA, APA, ASA, Chicago, and other citation styles to thesis development, global cohesion, grammar and way, way beyond. However, I see the core of Writing Center work as being more personal; we help students find ways around their own blocks. It's hard to write if you don't know what you want to say or if you feel like no one will listen since you're not a 'writer.' Empowering students to reconsider how they think of their writing selves is the most inspiring part of my work.

Last summer, I traveled to NYC and took a fiction writing course at Columbia University with author Mary Beth Keane. The experience inspired me to apply to a fiction writing MFA program at the Pratt Institute in Brooklyn. I was accepted and offered a scholarship, but since the time that I applied, I've decided to get my feet wet in the freelance writing world instead.

Thank you for perusing the links I provide here on my profile. Because my writing is versatile, I think every reader can find something they'll enjoy.

A few weeks ago on a Saturday, I thought it’d be nice to take my son to the farmer’s market. I packed a backpack with some airplanes, a water bottle, and a copy of James and the Giant Peach, things I anticipated that we would need on our outing, and we headed to the bus stop.

Before any of that, though, while I was still lying in bed that morning, I wrote something noteworthy in my journal. I wrote, “Today anything could happen and many things will. Am I going to let those things send my mind cascading into automatic reactions? Or am I going to notice that when it begins to occur and ask myself if it’s worth the pain for the strange satisfaction of worrying?”

My son and I headed to the rear corner of the bus, our favorite spot, and I opened up James and the Giant Peach. As we read, we were periodically interrupted by a man in the opposite corner who was unfamiliar with the bus system. He was well groomed and clad in clean, professional clothing. Between his questions, which were shyly and politely delivered, he worked on an iPad in his lap. Mostly, he wanted to know how far the bus went, whether it would change into another line and what line that would be, and things like that. I’m quite familiar with the public transportation in the area, and I was in a state of mind that welcomed anomalies in my routine. I answered each of his questions with devoted attention, and I looked into his eyes each time until I was certain that he felt clearer.

While the bus laid over at the Cordata Station and Solomon and I took a break from the book so that my voice could rest, the man started a conversation with me in earnest. His initial question had been about my bus pass, which I told him was my student ID. He now wanted to know what I was studying. I explained that since I’m an interdisciplinary student, the answer to that question isn’t so cut and dry, but that I’m essentially a writer. He told me that he was a physician, but that he has always had a deep connection with writers and books and that he wanted to be a writer once. He congratulated me on my courage, embarking on such an uncertain path.

One observation that my studious attitude towards experience lately has yielded to me is that Life talks. It talks constantly, always imparting fresh, novel morsels of data. If you are astute, you will see that the vast majority of your experience is utterly unpredictable. As John Fowles says in The Tree, “{Ordinary experience} is quintessentially ‘wild’ … unphilosophical, irrational, uncontrollable, incalculable. In fact it corresponds very closely – despite our endless efforts to ‘garden’, to invent disciplining social and intellectual systems – with wild nature” (37). I would add that ordinary experience doesn’t just correspond with wild nature, but it absolutely is wild nature and I defy anyone to point out to me where the distinction lies.

I had this in mind when I wrote the aforementioned journal entry. I’ve observed that habitually living as though I have it all figured out, as if I always know what’ll happen next because things are just that repetitious, totally obscures a realm of existence that I suspect many don’t even know exists. There is never any reason to be bored. Boredom only happens when we start to believe that our particular interpretation is absolute, when in reality, even the the symbols by which I’m transmitting this information to you now would have absolutely no meaning if it wasn’t for your wholly new and unique experience of them in this moment.

In her book Anatomy of Desire, Gina Lake writes, “We actually have always been living in the unknown, but we have been pretending to know because the mind prefers that to not knowing: We don’t know what is going to happen tomorrow or what we will do, but we pretend to” (63). From a collapsed, singular perspective, it would seem that pretending to have a grip on the future is advantageous. We can try to organize reality into a pattern that fits our template. We have no faith that if we don’t do this, Life will facilitate the continuance of our experience.

From the perspective of a lucid waking dreamer though, there is a strong incentive to shake off the habit of expectation. Because that dreamer knows how limited our creative power is in comparison with the creative power of which we are a small part. They then wisely choose to let their own creative power be in service of a larger creative power, instead of persisting in the futile effort to usurp control.

When you collapse each moment into a single, stale, mundane interpretation, you miss the messages. You are like the person who hears a child speaking to you, but projects your own, jaded, adult meaning onto their words and misses the innate wisdom of children. And we are all children with innate wisdom.

For instance, if I had chosen to categorize the man on the bus in some way that reduced his value to me, ie, impertinent bus novice, interrupter of books, iPad poking yuppy, man – who could not possibly lack a threatening agenda, et cetera, I would have missed his uniqueness, and under that, his humanity, and under that, his being.

The man on the bus said that our society places so much importance on scientific measurement and quantifying and labeling when in truth, our only hope is in what he called ‘sense making.’ To him, this sense making happens on a highly individualized level and it has everything to do with stories. It requires the contemplation of the mutability of our perspective, but also of the universal experience of having one. He said that in his observations as a physician, he’s seen that when people have damaged their limbic brain, the part correlated to their emotions, they no longer do anything. There is no drive. To him, story was fundamentally linked to emotion. And sense was fundamentally linked to story.

He asked me if I’ve encountered a performance artist in the area named Pam Kuntz. I’ve seen fliers for the performances that she arranged, but I know nothing about her. He described a performance of hers that spoke to the heartbreak caused by war. The mother of the first soldier to die in Iraq participated in the performance. The man on the bus spoke of the trust required on the part of the artist, the belief that she could throw so many chaotic, emotionally charged elements together in a piece and that whatever was alive in the art, whatever needed to come through, would come through.

He said that her art “entered his heart and changed his mind.” He cried when he said this. I cried too, and added that artists need to know how to move out of the way. I mentioned some of the questions that I’ve contemplated lately about writing: Why do all people tell stories? Why do we write them down? Where do the stories really come from, and isn’t it kind of magical? Isn’t it kind of a time machine that bridges the vast expanses between moments?