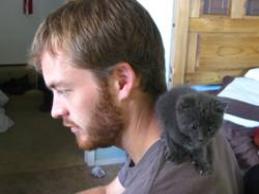 I'm just a family man who loves writing. Before relocating last year, I spent three years working as a staff writer and web/calendar editor for an alternative weekly paper in California, where I did local business write-ups, investigatory pieces, news briefs, arts features, and movie reviews. I also wrote a regular humor column, which won second place in the 2012 Association of Alternative Newsweeklies Awards. When I'm not writing, I enjoy building things around the house, exploring the outdoors with my wife and daughter, gardening, fishing, and going out with friends. I'm a pretty easy going guy who picks up new subjects quickly. Please don't hesitate to reach out if you think I might be a good fit for your project. Have a good day!

On July 24, a happy family fell in love with a 7-pound baby girl. She had her mother’s eyes and her father’s nose, with a full head of his dark black hair. She seemed healthy.

At the time, Jamie Maraviglia-Manalo was looking forward to a short maternity leave and getting to know her new daughter. As the marketing director for the Clark Center, a nonprofit theater in Arroyo Grande, she had a benefit plan, but it wasn’t great. She was scheduled to be back to work in less than a month, but Maraviglia-Manalo wanted nothing more than to settle into a routine of playtime, snuggling, late-night feedings, and diaper changes.

What she wouldn’t give to change a diaper.

The joy that came with Naya’s birth quickly turned to anxiety as Maraviglia-Manalo and her husband Dan Manalo realized their child wasn’t having bowel movements. She also wasn’t eating.

When Naya began vomiting bile one night, her tiny body convulsing pitifully with the effort, her parents had enough. The frustration spiked to full-blown panic, and they rushed their daughter to the emergency room at French Hospital.

Naya Manalo has fought for her life ever since. In the few dozen days she’s been on Earth, she’s seen the back of an ambulance on the way to a medical center in Santa Barbara, had exploratory surgery as doctors vainly sought a bowel obstruction, and been air lifted to the Children’s Hospital in Los Angeles where she remains in critical condition.

“You expect a healthy baby, and that’s what Jamie and Dan deserve,” said Lindsay Wagner, a family friend. “It’s obviously hard, but Jamie’s one of the strongest people I know. I’m thankful for her strength.”

An English major and avid writer, Maraviglia-Manalo has turned to blogging as a means of venting her feelings and documenting her daughter’s progress. She remains hopeful and expresses immense gratitude for the support of family and friends.

“I feel like I somehow caused this to happen,” she wrote after a rare diagnosis of lymphangiectasia finally gave the doctors a plan of attack but not much hope for a permanent cure. Naya may need treatment for years to come.

“All I know is that she doesn’t deserve this, and my husband and son don’t deserve to be dealing with this,” she wrote.

The blog can be found at notesofnaya.blogspot.com.

While these desperate parents stay by their daughter’s side in L.A., neither is working and medical bills are mounting. You can help by donating to Naya’s Fund online at wepay.com/donate/88253 or jackshelpinghand.org. Make donations “for the benefit of Naya Jane Manalo.”

A fundraising picnic for Naya is scheduled for Sept. 18 from 1 to 4 p.m. The event will take place at Filipponi Ranch, 1850 Calle Joaquin in SLO. Tickets cost $25 for adults and $12 for children and include a fish taco meal supplied by Scotty’s Bar and Grill as well as entertainment by local theater and dance performers. There will be raffle tickets, T-shirts, beer, and wine available for purchase.