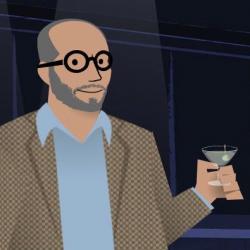 There's an ongoing debate in the Dallas arts scene about whether Dallas jazz remains viable, or if it is slowly drying up.  There's a small jazz venue in Dallas that may well be the beating heart of straight-ahead jazz in the Metroplex. The concentration of talent at this place is amazing; it's where the best in Dallas' straight-ahead jazz community go to work on their music and develop the sounds they play around Dallas and Fort Worth the rest of the week.  This place is the wellspring.

Is the Dallas jazz scene dead? Far from it, at least that's what Darryl Thomas, the owner and operator of Sandaga Jazz will tell you if you give him the chance.  "The Dallas jazz scene is really more vibrant than it gets credit for," Thomas told me before a recent Thursday night jazz event at the venue.  According to Thomas, the Dallas jazz scene embraces many diverse approaches: straight-ahead, fusion, smooth jazz, and rhythm and blues can all be found at several venues in the Metroplex.  At Sandaga, the focus is on straight-ahead jazz and building on the traditions of jazz greats like Duke Ellington.

One of the things that sets Sandaga Jazz apart as a Dallas jazz venue is that it isn't a club or restaurant: it's a non-profit foundation devoted to the arts.  According to Thomas, funding can be a struggle at times.  Sandaga Jazz is a 501(c)(3) and is largely dependent on donations at the door. Sandaga Jazz was established in 1999 and grew out of Thomas' experiences with jazz in New York and Los Angeles.  Thomas created the venue as a way to give his friends a place to play their music.  It wasn't long after the venue was established that it began to routinely draw crowds of twenty-five to thirty people, and even larger crowds when special guests like Grammy winner Wynton Marselis sit in.

The Sandaga Jazz venue is located in the same building as Thomas' African art dealership, Sandaga Market.  The art market has been in the same location for nineteen years, and Thomas bought the building eight years ago.  Sandaga Market imports West African art and sells to both private collectors and museums.  Behind the small showroom and office, in a large backroom, you will find a low bandstand flanked by a piano on one side and an organ on the other.  Depending on what night of the week it is, you may find anything from a trio to a sixteen-piece big band playing jazz.

The atmosphere at Sandaga is casual, but serious and focused, especially among the musicians.  The emphasis is on the music, not drinks or food. Sandaga focuses on dance hall jazz and what Thomas calls "sit-down-and-listen jazz" played in the tradition of straight ahead jazz.

This is not the venue for you if you only like homogenized performances of old jazz standards.  But if you enjoy listening to jazz musicians working out new compositions and arrangements live on stage, Sandaga Jazz might be something you need to check out.

The night I first visited Sandaga Jazz, I caught a performance of the Scott Bucklin Quintet.  Bucklin's musical approach was both improvisational and collaborative.  Bucklin was trying out new material for an upcoming album and passed out sheet music for his band mates.  Local jazz greats Shelley Carrol and Pete Gallio tackled the new compositions with gusto.  Vibraphonist Dana Sudborough sat in and also contributed new material.  They were ably backed by bassist Jonathan Fisher and drummer Andrew Griffith.

I returned a few days later for the big band that plays the last Wednesday of every month.  This band is a feast for jazz lovers.   Organized by Brad Leali and Shelley Carrol, the lineup is heavy on brass and woodwinds, and produces an incredibly fat and luscious sound reminiscent of the great big bands of the golden age of jazz. The band's repertoire includes jazz standards as well as new material produced in the tradition of Ellington and others.  This band's focus is on swing, but it also incorporates bop influence on many of its tunes.

On this particular night, local jazz vocalist Sandra Kaye joined the band onstage for several numbers.  Kaye sang with the verve and precision for which she is known, her style resonating with the underlying swing of the band's performance.  I caught up with Kaye during a break and I asked her about Sandaga Jazz.  "Sandaga plays an important role in keeping the Dallas jazz scene strong," she replied, "no other place in Dallas is devoted to the music the way this place is."

Teaching the next generation of jazz players is a key part of what Sandaga is about.  "A lot of young people haven't been exposed to good music," says Thomas, "the goal of our Youthful Jazz program is to put promising students from local high schools and colleges onstage with jazz legends."  Great jazz players who have taken part in the Youthful Jazz program include Steve Turre, Wycliffe Gordon, and the late, great Marchel Ivery.

Sandaga fills a unique niche within the Dallas jazz scene.  There are larger and glossier venues, but at Sandaga the focus is on music and the musicians who play it.  Some of the best jazz musicians in Dallas come to Sandaga Jazz hone their art and pass it on to younger musicians.  "We try to bring in the best musicians we can," Thomas says, "It's about keeping the music fresh."