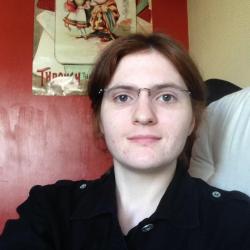 I am Emrys Merlin Meluvor, children's fantasy author extraordinaire. In the world of creative writing, I have essentially aspired to the bottom rung of the hierarchy of pretentiousness. This suits me perfectly. I do not write to expound philosophy or floor the world with how deep and clever I am. I write because I love stories: their flavor and feeling, and the way that they all hang together and connect to each other.

When I'm not writing, I'm a student at a bizarre little college in Annapolis called St. John's. Here I am being inundated with the history of Western thought, philosophy, and other things known collectively as the Liberal Arts. How I feel about this depends on the day you ask me.

My writing style tends to be spare. I don't like to waste words, but that doesn't mean I am not poetic. The fewer words used, the more care must be put into choosing them.

Thank you for reading, I look forward to working with you.

The late August moon brooded sullenly behind a gauzy layer of clouds. A few miles outside the city, thunder grumbled half-heartedly. The air felt too thick to move through; it clung to skin and clothes like syrup, leaving everything damp, sticky, and seemingly twice as heavy as normal.

In a parking lot behind a department store, a lone car was parked in the puddle of light cast by a street lamp. It was an ancient sedan with peeling beige paint faded nearly to grey by the sun  and cracked leather seats. A girl sat sideways on the back seat, leaning against the door. Her cropped black hair was plastered in improbable directions by sweat. Her dark eyes were still red-rimmed and slightly swollen, but she had finished crying some time ago. Now she was working.

A large metal bowl sat on middle seat, about half full with dark red wine. In her right hand was a ziploc bag filled with cooking herbs. In her left, she clutched a heavy, iron poker.

She poured the herbs into the bowl and began to sing. Her voice was shrill and reedy, and uncertain to begin with. Then something seemed to catch her voice and pull the song out of her. It had harmonies and counter melodies that were not coming from her; the buzzing of the cicadas and the thunder both got caught up in it somehow.

She sang for all she was worth, and as she did so, a patch of the universe on the other side of the car started going strange. Nothing about it changed, there was just a sudden, immense feeling of wrongness to it. The wrongness stretched and spread until it filled the whole car. She was bathed in it, and it made her skin crawl and her neck prickle. She gripped her poker more tightly.

All at once, the wrongness gave a great lurch, and part of reality twisted sideways, allowing Them through. They sat in the seat on the other side of the wine bowl and turned to look at her curiously. Their presence silenced her voice in awe. They were beautiful. Completely, terrifyingly, horrifically beautiful, and so utterly something else that her brain kept trying to tell her They weren’t there. At the same time, They looked like an ordinary human: a woman with a sharp, beautiful face and perfect blonde curls, wearing a tight leather skirt, black shirt, and biker’s jacket. Between Their skirt and the tops of Their black strappy heels, They had fishnet stockings.

“Why did you call me here?” They asked, leaning back and folding Their arms. Their tone was one of vague interest, and it reminded her uncomfortably of a cat eyeing a mouse and trying to decide if it was worth the effort of catching it.“I need a wish,” she whispered.

An Essay For My Language Class

I am sitting at my desk, trying to start this essay. Pascal is giving me and haughty, sarcastic look from the cover of my copy of the Pensées. The irony of this fact is not lost on me, and I turn the book over. I don’t want to write about Pascal this morning, because I am in a good mood and would like to stay that way.

Or, I am mostly in a good mood; I’d be doing a lot better if my mind weren’t going completely blank at the moment. For some reason, the idea that keeps coming to me is that I should start with the question, “What is thought?” I even wrote it at the top of my paper, but then I felt like a complete paunce and erased it. So here I continue to sit, mulling things about in my head. Ruminating.

Those are both good words. Mulling. Steeping spices in (if you’re smart) alcohol. Flavors seep from one to the other, mingling into something entirely new. It fills the entire house with heady scents that warm you up and transforms even mediocre wine into ambrosia. Ruminating, of course, is slightly less romantic. Comparing anything you’re doing to a cow chewing its cud is not flattering. It’s accurate though. You chew the idea over in your head, then send it away somewhere out of sight. At some point it is going to resurface, with a rather different consistency, and you’ll do it over again. I especially like stretching this metaphor a bit, and saying that the resurfacing need not be voluntary. Your mind may well vomit the idea back up at the least convenient time. This is why writers always carry notebooks.

The most interesting thing about both of these words though, is the fact that they describe something involuntary on your part. When you mull something, you put all the spices and the wine together in a pot and then just let it simmer over low heat. The heat and the nature of the ingredients do the actual work. If you sat down and tried to extract flavor units out of anise and cardamom pods and cinnamon sticks, and then inject those into the wine, you’d be at it a long time and would likely not succeed in the end either. The only thing you can control is what goes into the pot.

The easy thing to do next would be to start moralizing and philosophizing about what you ought to put into your pot. I’m sure that for every person you ask though, there will be a different answer, just like no two chefs would give you exactly the same recipe for mulled wine. From this I conclude that the only good answer is that what you put in your pot should depend entirely on what you want to get out of it.The connection isn’t at all mysterious or esoteric. We aren’t making souffleés. If you want your thoughts to have a certain flavor, put things that taste like that into your pot.

It’s not just unconscious thought that uses these sorts of metaphors though: many of our words for thinking have to do with food. Ideas can be half-baked, after all.There is food for thought. We mull ideas, chew on them, swallow them, digest them. A thought can even be savored if it is pleasant enough. On the other hand, some thoughts are too bitter to be swallowed, and some are poisonous. Light or frivolous entertainment is bubble-gum for the mind: it’s fun to chew on and tastes good at first, but then you realize you’re just chomping on a hunk of rubber. And you certainly don’t want to swallow it.

This makes sense. After all, eating is one of the most basic necessities of life, and yet it can also be elevated to one its greatest pleasures. As humans, we are incapable of not thinking, but we also make it so much more than a simple necessity. We feast on books and devour knowledge. We savor delicate fantasies and gnaw the cold bones of the universe. And always, bubbling away just outside of where we can see it, things are mulling about together.

How can this be though? Food is a sensuously pleasurable thing. What does it mean to suggest that something of this same sensuousness is present in our thinking? This is a question that would be worth exploring at some length in a longer paper. For now though, it’s time for breakfast, and I do still have to finish reading Pascal. I think that he may have been mulling his thoughts in gin rather than wine.