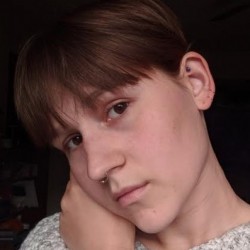 Since I was young, I have been enthralled by what words can accomplish, from the evocation of emotions to the education of millions. I have always maintained a passion for writing; it is something I both enjoy and take pride in doing. I am currently pursuing a bachelor's degree in psychology and enjoy writing for pleasure and payment in my free time.

Stepping into his room for the first time, one might be overwhelmed by the mountain of clothes pushing through the folding doors of the closet or the leaning towers of thick, hardcover books haphazardly stacked against a coffee table. The rough chocolate carpet is littered with granola bar wrappers and dirty socks, and his snake, Freddy, is thumping his cage in an attempt to escape.

The pale-yellow paint of the walls is chipping, and there is an old TV with a touch of dust pushed up next to the thin old door, a lit cinnamon candle resting on it’s top lazily enveloping the room with it’s delicate aroma. The opposite wall houses a futon that has all the comfort of a lumpy rock covered in hazel fabric, and a big blue Mexican blanket hangs above it covering a window and blocking out the drafts of winter on cold nights and the heat of summer when it is warm. Underneath the lumpy rock is a collection of paintball equipment, childhood toys, crumpled up homework assignments, and anything and everything that one could possibly imagine. The abyss of underneath that futon is endless. The smoothly sanded coffee table is stained from years of use and dominated by Freddy’s cage and stacks of books. There is a jumble of clear plastic tubs underneath the table, containing miscellaneous trinkets.

The two lamps, one by the door and one on the cluttered table, shed warm light on the mess of his room. The lamplight illuminates just how small of a room his is, but at the same time emphasizes the enormity of adventures one could have in the limited space. The pleasant glow seems to push the walls and instead of accentuating the chips and screw holes, it bathes them in a quiet beauty.

A stick of Nag Champa incense burns tranquilly on the coffee table, the gentle smoke dancing with the mildly musty smell of Freddy, basking in his heat lamp and the soft smell of laundry detergent rising from the pile of clothes. The unique smell of books mingles with wisps of his unwashed wrestling uniform. These auras mix in turn with his own indescribable scent, a combination of sweet sweat, Old Spice deodorant and his fruity shampoo.

Though the initial messiness is the first and thus most vivid perception of his room, the second layer is most important. This layer appears after sitting on the lumpy futon and listening to Freddy’s incessant thumping synchronize with the chorus frogs in the tinkling little creek outside his house, after watching the fuzzy old television come to life with color and sound. After feeling his warm, callused hand brush back your hair as you doze on the nutmeg carpet, the mess is beautiful. The crumpled papers and old wrappers are crisp autumn leaves and the walls are warm butter. The soft clothes forcing themselves out of the little closet form the perfect place to collapse and take a quick nap, and the clutter on the little shelf next to the television essentially disappears as a rough system appears.
Of course, the mess isn’t perpetual. Some days, the coffee colored floor, futon, and all available surface areas are clean. Even Freddy’s musk is faint. Somehow, though, the light does not seem as comforting and the bumpy futon is even less inviting. The room still seems lived in, of course, just not by someone with as much vigor for life; someone who has all the time in the world to stay inside and clean instead of go explore the world.